Back In Print After Almost 40 Years: The Surreal Feminist SF Classic, PASSING FOR HUMAN By Jody Scott 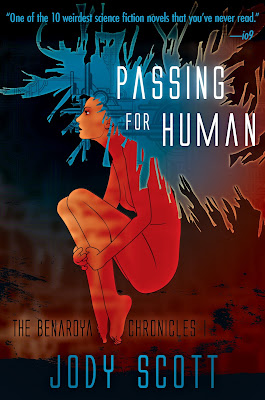 Own it for $2.99!
Free on KindleUnlimited

Considered by i09 as "One Of The 10 Weirdest Science Fiction Novels That You've Never Read" Digital Parchment Services, and the estate of Jody Scott, is thrilled to announce the republication of Passing For Human!

Passing For Human is the beginning of The Benaroya Chronicles trilogy, continued in the soon-to-be-released I, Vampire and concluding with Scott's never-before-published final book in the series!

"A joyously and at times scatologically tangled Satire of the post-industrial Western world from a Feminist point of view that wittily verges on misandry." -The Encyclopedia of Science Fiction

Passing for Human Or
Who Isn't Afraid Of Virginia Wolf?
Starring:
Benaroya
A 36-foot
Extraterrestrial "dolphin"
In the role of:
"Brenda Starr"
"Emma Peel"
Mary Worth
And a happy New Guinea hoptoad

When a dolphin-like alien comes to Earth disguised in a female human body, it sets the stage for a wild feminist romp that out stranges Stranger in a Strange Land!

"The pace of the story never lets up, yet it finds room for serious contemplation of humanity’s woes. The style is easy, with an edge of noir. The central character is a bit of a tough girl which, mixed with her naivety about humans, makes for an intriguing and likeable character. Especially as she (in common with the other aliens) inhabits bodies she has chosen from Earth culture – Brenda Starr, Emma Peel, and Virginia Woolf. Who could not like that, especially the final scenes in which Virginia Woolf is involved in a running gun battle. The humor, pace, and wry observation make this a rare and wonderful beast – a serious science fiction novel that doesn’t take itself seriously."
– Graeme K Talboys, grumbooks Review

"The novel leaps along with an energy and a disregard for convention that reminds me a little of genre outsiders like Barry Malzberg and possibly Josephine Saxton in that this reads like a romp through the Collective Unconscious. A closer comparison might be with the early novels of Ishmael Reed who shares with Scott a vitriolic contempt for seemingly all and everything, sniping and satirizing hilariously along the way.  Jody Scott’s wild imagination, seemingly scattershot but tightly controlled, makes Passing For Human an absurdly comic romp of unexpected juxtapositions and witty asides. Good examples of what SF can do when it steps out of its comfort zone, and of how women’s SF can challenge the genre assumptions by challenging its tropes and its language. Take a look, see what you think."
– Performative Utterance

Passing for Human (The Benaroya Chronicles) By Jody Scott http://amzn.com/B0143K2LXG

FREE on KindleUnlimited for a limited time!