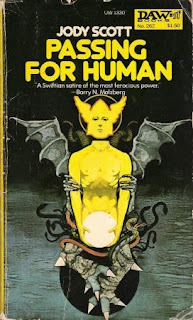 Benaroya is a giant space dolphin who's only interested in pleasure, until she decides to study humans. To do this, she disguises herself as Brenda Starr, the girl reporter from the newspaper comics. As she tells one human, "You might say I try to relate in a meaningful, concerned way to autochthonous bipeds in general." Later, Benaroya disguises herself as Emma Peel (from The Avengers) and author Virginia Woolf. Other members of her species are disguised as Abraham Lincoln and George S. Patton, while their support drones look like Richard Nixon. While disguised as Virginia Woolf, Benaroya gets herself captured by a race of psychopathic aliens who want to destroy the Earth, and you get a weird scene where Virginia Woolf debates whether it's a bad thing to fall in love with the leader of a group of genocidal alien psychopaths.