Check out this very nice review of Jody Scott's Passing For Human, courtesy of Performative Utterance. 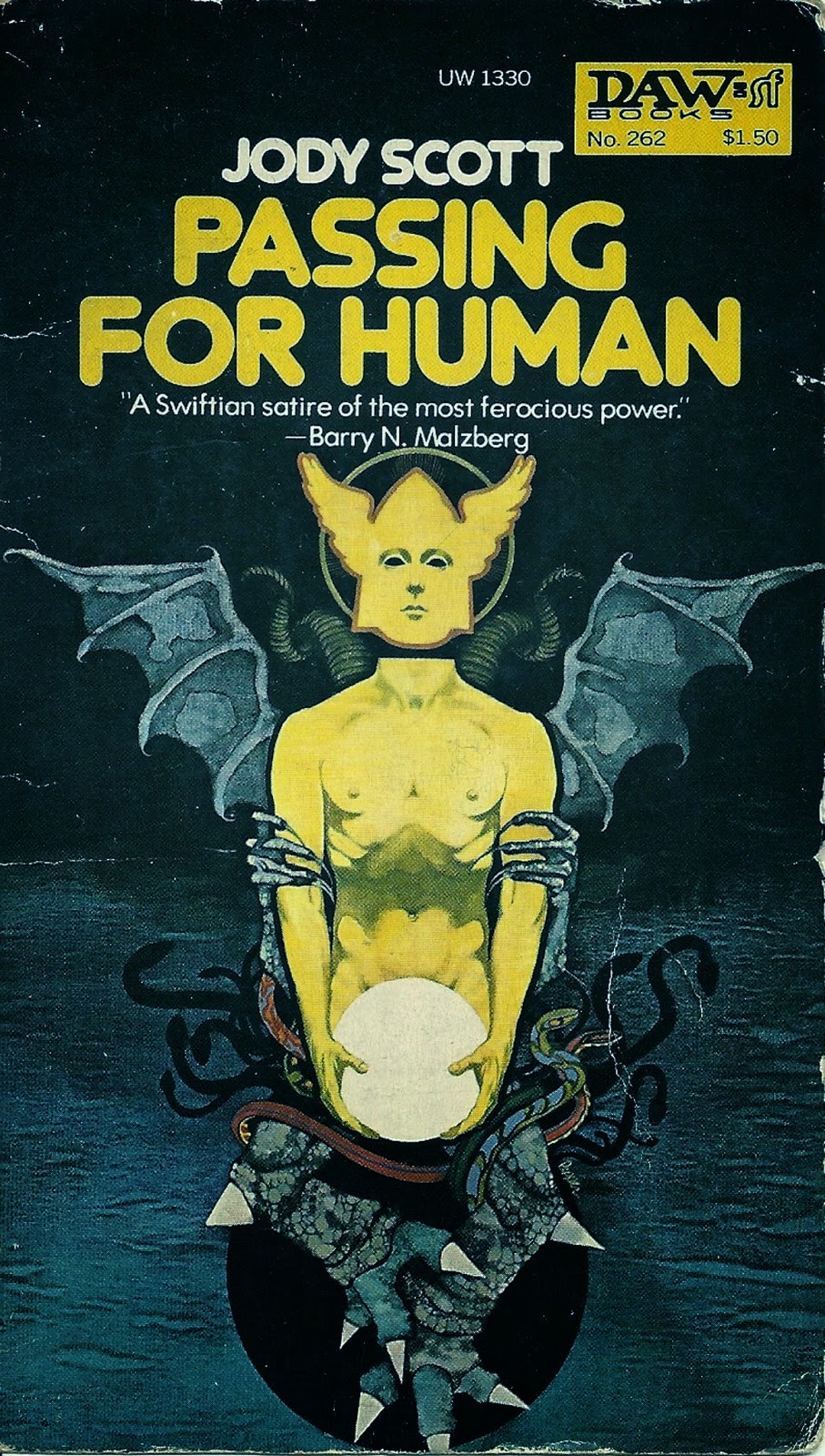 The fantastic travelogue has been a literary staple since the Iliad at least, and as a means of turning a satirical mirror on society’s failings one of the most frequently adopted. Think of Gulliver’s Travels for instance, and all its subsequent copies. Feminist SF has used this model to explore lands from Herland to Whileaway most effectively.

In Passing For Human Jody Scott takes a slightly different tack by telling her story from the distorted viewpoint of a Rysemian alien, Benaroya, on an anthropological research visit to Earth in the 1970s. Benaroya is, however, apparently amoral, pleasure focussed and careless. She doesn’t seem to like the ‘Earthies’ as from the start she is condescending, sneering and labels humans primitive ‘bushmen’ on a ‘savage backwater.’

To visit Earth Benaroya has had to transfer from her giant dolphin-like Rysemian form into one of a choice of human simulacra. When we first meet her she is a faithful copy of Brenda Starr the intrepid girl reporter of comic strip fame. Later she will be Emma Peel and most significantly Virginia Woolf. Her fellow Rysemians will include Abraham Lincoln, Heidi’s Grandfather and General George S Patton. Support drones are modelled on Richard Nixon. Whilst on Earth Benaroya really just wants to have fun, experimenting with the limits of the Brenda Starr form initially, in a road race that leaves several humans dead and a half-naked Starr in custody, where her lawyer is unable to resist sex with her.

On her return to her shipworld Vonderra, Benaroya is informed of a threat. Another alien, the Sajorian Scaulzo is about to invade Earth and Benaroya must prevent this. The Sajorians, we are told, are the only truly psychopathic race to have achieved interstellar travel. They are reminiscent of Klingons in that respect, but are explicitly compared to humanity. Scaulzo himself is referred to by Benaroya as The Prince Of Darkness early on, and later, when captured as Woolf she muses on whether it is wrong to ‘fall in love with the Prince Of Darkness.’

Passing For Human has a plot, the prevention of Earth’s destruction, and Benaroya’s learning about humans and herself, but plot is not really this novel’s focus. Events happen apace, with absurd leaps, and devices such as the assorted ‘identities’ Benaroya adopts are not really explored in any typical SF manner. As a whole, despite its aliens, spaceships, super weapons and so on, Passing For Human doesn’t look like a lot of SF these days, being unconcerned with plausibility, plot cohesion or real characterisation. The novel leaps along with an energy and a disregard for convention that reminds me a little of genre outsiders like Barry Malzberg and possibly Josephine Saxton in that this reads like a romp through the Collective Unconscious. A closer comparison might be with the early novels of Ishmael Reed who shares with Scott a vitriolic contempt for seemingly all and everything, sniping and satirising hilariously along the way.

Yet the California scenery was ever so pretty. There, just ahead, was some sort of fabulous monument. What could it represent? Aha: a giant taco 80 feet tall, oozing lettuce, bits of cheese and tomato and a thick purple goo, possibly plum jam. She’d seen ever so many pictures in magazines. But the monument was made of plastic! Oh, how inventive. And the sweet, little bushmen were lining up to get small, hot duplicates of the hot food product.

Benaroya felt a pang of excstasy, this trip was going to be thrilling.

Even amidst action scenes Scott doesn’t let up on her targets:

‘Emma Peel admired Boolabung hugely. Her Captain was a real man, macho as all get-out, never whimpering or complaining.’

As Emma Peel she is later picked up hitch-hiking by a gangster who asks why she is out on the road:

‘I’m an anthropologist. On vacation.’

‘Study Indians and that kind of thing?’

She tittered. ‘You might say I try to relate in a meaningful, concerned way to autochthonous bipeds in general.’

‘A little girl like you with a big job like that,’ he marvelled. Benaroya pondered this slippery remark and concluded it was the ordinary Earthie belittler camoflaged as a compliment.

The rapid non-sequiturs Scott puts into Benaroya’s mouth and her aside justifications combine sharp jabbing observations and great humour. Those who seek to deride feminist SF often suggest that it is too serious, po-faced, but Jody Scott’s wild imagination, seemingly scattershot but tightly controlled, makes Passing For Human an absurdly comic romp of unexpected juxtapositions and witty asides.

Being satire this 1977 novel does show its age perhaps more readily than some of its contemporaries in places, but as so little has changed in many respects its jibes at patronising men, the worship of commercialism and other areas still contain truths. Along with its loose sequel I, Vampire Jody Scott has left SF with two provocative, compassionate, and thoughtful short novels. Her style will certainly not be to everyone’s liking, as I said, these aren’t traditional SF at all, but they are good examples of what SF can do when it steps out of its comfort zone, and of how women’s SF can challenge the genre assumptions by challenging its tropes and its language. Take a look, see what you think.