(from the Ernest Hogan site) 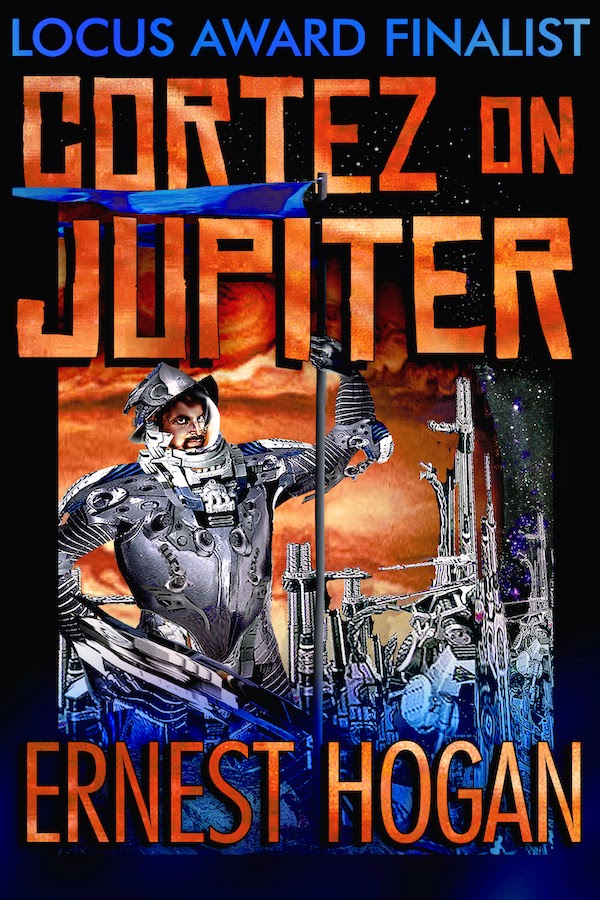 Ernest Hogan’s debut novel, published in 1990 as part of Ben Bova’s Discoveries series, is a remarkable piece of original SF that is radical in ways that perhaps haven’t really been acknowledged yet.

Cortez On Jupiter is the story of graffiti artist Pablo Cortez’ career progression from Basquiat-esque guerrilla muralist in 2020s LA via a staggered Bester-like plot to a weightless take on Jackson Pollock on in orbit above the Great Red Spot. Meanwhile a series of attempts to communicate with the alien Sirens of the Jovian atmosphere repeatedly have fatal consequences. Fascinated, Pablo volunteers.


Initially framed as a documentary on Pablo’s career, told in flashback and transcripts, Cortez on Jupiter steers a course that manages to include explicit satire and old-fashioned sensawunda SF tinged with cyberpunk simultaneously.

The Science Fiction Encyclopaedia talks about Hogan’s ‘pleasing gonzo energy’ which most obviously manifests in Pablo’s rapid-fire Spanglish-with-Nahuatl dialogues. Long, free-flowing sentences leap around worldbuilding impressionistically rather than through any attempted simulation of mimesis. Pablo drops Aztec deities into his rambling seemingly allocating new mythic status to everything.

Paint stick in hand like an Aztec priest wielding a flint knife, or that cop swinging his baton on that cool starless night years ago in L.A. that crushed the buckle from my gas mask into my skull, leaving a cute little scarito in my scalp that I wore my hair extra short for months to show off. Or like in that time before time when space wasn’t separate from time or anything was separate from anything else and all was the goddess Coatlicue, She of the Serpent Skirt, but then she was the Cipactli monster: alligatoroid, fished, but more a great, quivering mass swimming in an endless sea that was also a sky, a mass with mucho, mucho hungry mouths that devoured everything, the monster, the sea, the monster, the sea, so the sea was the monster and vice versa — everything all mixed up like Siren zapware feedback — ay! Makes me want to be like the gods Quetzalcoatl and Tezcatlipoca — I wonder which I am, culture giver or trickster? Could I be both? Why not? I know how they felt when they decided, Hey, enough of this formless nadaness! Let’s tear this monster/paint blob apart! (p2-3)

It becomes clear later that Pablo is, as he suspected, both culture giver and trickster. In particular the loner Pablo continually voices the trickster’s absence of respect for society, whether in small groups, through the justice systems, or in the Space Culture Project. In the latter Pablo rails against the Director as “An icon-maker rather than an iconoclast. No wonder we didn’t get along.” (p83)

One of SF’s favourite toys is the neologism, from raygun to cyberspace SF has modified language to tell its story but I struggle to think of any writer who has made language so distinctly his own the way Hogan does. (He even creates the wonderful “nuevofangled cyberpsychoautonomoelectromagneticneuroextrasensorywhatchamacallit.” p210) The Spanglish vocabulary not only gives Pablo cultural depth but contributes in classic trickster fashion to subverting the otherwise standard First Contact story. In his hands the toy is a weapon, reflected by the Picasso quote Pablo has tattooed: “Painting is not done to decorate apartments. It is an instrument of war for attack and defense against the enemy.” (p25)

Writing in SFEye Hogan said of himself:

Growing up as a Chicano, I often found it easier to identify with aliens, mutants and other sci-fi thingies than with the white people who were supposed to be destined to conquer the galaxy.(Greasy Kid Stuff From Outer Space, SFEye 11, December 1992)

That outsider feeling has translated in Pablo into the man who can communicate with the Sirens when they have mentally destroyed others because of the artistic perspective and because of that identification more with the alien than society. In Cortez on Jupiter Ernest Hogan challenges the Heinleinian vision of space conquest, the prevalent Manifest Destiny of Space Exploration that lingers on. The ‘heroic’ first man to lose his mind to the Sirens is Phil Hagen.

a typical nondescript astronaut — not even the fact that he was black and raised in Brazil made him much different from the sterilized whitebread spacemen of the mid-twentieth century. He was all hard-edge haircut and close shave all the way down to the convolutions of his brain. (p27)

That sounds like Starship Troopers‘ John Rico to me, and the last line of that paragraph reads: “I can’t even recall anything he ever said that interested me.”

Cortez On Jupiter takes a conventional mainstream SF idea or two as its plot, hence the SFE suggestion that Hogan isn’t doing anything radically original, but in warping language as Pablo does “I really don’t care what language they’re from — I just use ‘em when they fit.” (p9) Ernest Hogan satirizes swathes of SF that went before.

Historically, Hernan Cortez defeated the Aztecs in part through his relationship with a woman who interpreted for him. Pablo is a very different Cortez, but his return from the Sirens is facilitated by fellow artist Willa translating his thoughts. Multi-faceted synaesthetic communications assimilate Pablo and the Sirens where the establishment protocols all failed. Hogan convincingly offers SF a new, post-Anglo paradigm. Pablo’s linguistic exuberance and artistic questing highlight and challenge the media obsessions and the cultural establishments of today both real and as more commonly portrayed in SF.

Cortez on Jupiter is a frequently very funny novel but one with a serious heart. His story may be closest to Alfred Bester, but his freewheeling hi-NRG word mashups and sharp wide-ranging satire owe as much to Ishmael Reed. Twenty years on I still know no writer in SF consistently doing what Hogan does with language to document, shape and comment on colliding cultures.